Exercise bikes can be a great way for seniors to get in a great workout without the additional risks associated with traditional biking.  Think potholes, falls, wipeouts, broken bones.  Moreover, exercise bikes can be used year round, rain or shine, i.e. no excuses.  Most seniors need some kind of exercise.  Remember that sarcopenia is a real thing and the health benefits of occasional exercise are too long to even list.

Great, you’re convinced.  An exercise bike is the way to go.  But which to buy?  How do you even begin to choose?  And more importantly why are there so many choices for something that should be so simple?  I can sense your frustration from here.

Let me help you focus your search a little first.  Remember that getting on and off the bike will probably be the most dangerous or difficult part.  Traditional exercise bikes usually require some kind of mounting movement just to get on and once on require you to balance yourself, using the handle bars, on the bike.

We’re not going to go that route.  We’re going to limit ourselves to recumbent bikes.  Why? The Schwinn 270 has all the features we’re looking for in an exercise bike for a senior, except one (we’ll get to that.)

The levels of resistance are appropriate.  As it stands, the Schwinn has 25 levels of resistance to choose from which should offer enough fine grain control to allow even the weakest of seniors to find a level they can work at.  Moreover, the fine grain of the leveling should allow nearly anyone to find a level where they feel they’re putting in just the right amount of work.

One common problem with recumbent exercise bikes are that you tend to overheat due to the fact that the seat has a back to it (unlike traditional bikes) and you’re not moving through the air.  The Schwinn solves these problems by including a seat with a vented back and including a three speed fan in the control panel near the front of the bike.

The walk in design is a real plus for seniors.  Nothing to lift your leg over.  Just walk in, sit down, power up and peddle.

The Schwinn also includes two side bars near the seat.  They serve three purposes.  The first is that they help the user get on and off the bike.  Second, they allow you to have something near the seat to hand onto during more intense peddling.  And last they include heart monitor pads on the bar which allows the biker to see what their heart rate is during the exercise.

In terms of what we don’t like… well it’s a problem that all recumbent bikes seem to share.  Complexity of the controls. Fortunately it’s possible to switch to a manual mode where you just specify the resistance and start peddling.  Still, the controls, from a senior point of view, might be a little intimidating. The Nautilus has many of the same features as the Schwinn.  In fact, they’re very very similar to each other.

The first think you’ll notice is the walk in design.  Nothing to lift your leg over, nothing to climb over.  The Nautilus also has two bars near the seat for additional safety.  Note that like the other bikes it has heart monitor pads on the grips to allow the biker to view his or her heart rate.

In terms of resistance levels, the Nautilus has 20 which for most people would be more than enough.

The same solutions to the user heat problem has been put forward in this product as well.  The vented seat back to allow heat to escape and a three speed fan will all help you keep cool while using this bike.

Again this product, like all of them, suffers from the controls being rather complex.  I don’t see this problem going away without losing additional features like the fan, heart monitor and digital resistance controls so it may just be the price we have to pay. 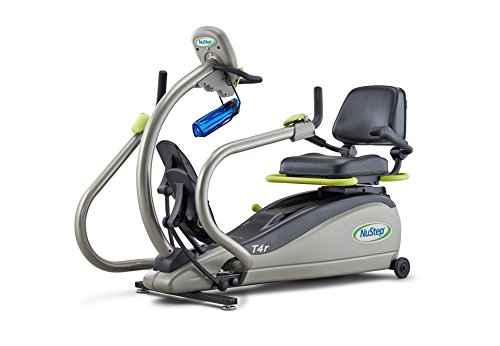 This bike is a beast.  The only thing preventing it from having the top spot is the price… that price.  So we’re going to include it but explicitly note that you’ll get most of what you want for much less with the previous two bikes.  Ok.  Enough about the price, let’s dig into the details.

This bike can be called a bike in the sense that you’re technically peddling.  In reality it’s more of a recumbent elliptical machine.  That means more calories burned and easier on the joints.

This bike also has the advantage of being a full body exercise machine.  Both the arms and the legs can be worked simultaneously.

The seat features brightly colored handles and there are arm rests that can also help keep you safe in the seat.

You’ll notice that there is a slight leg raise required to get on the device.  It isn’t that substantial but it’s worth noting.  Also the bars for the arms can potentially get in the way a bit.

You’ll also see that while this bike is advance in some ways in others it’s not so great.  For example, the seat back isn’t vented.  There also isn’t a fan.  The solution is to buy an external fan and have lots of cool dry shirts you can periodically change into.  Either that or take it slow and pause to cool down.

Now the controls are where this bike really shines.  They have a simple ONE button start with just a handful of other buttons to control resistance.  Simple.